A bold vision: A connected network of lands and waters that supports thriving fish and wildlife populations and improved quality of life for people

An ambitious goal: A 10% or greater improvement in the health, function, and connectivity of Southeastern ecosystems by 2060

A Blueprint for action: A data-driven spatial plan that's helping more than 250 people from over 100 different organizations bring in new funding and inform their conservation decisions

SECAS is a regional conservation initiative that spans the Southeastern United States and Caribbean. SECAS was started in 2011 by the states of the Southeastern Association of Fish & Wildlife Agencies and the federal agencies of the Southeast Natural Resource Leaders Group. SECAS emerged as a response to the unprecedented challenges facing our natural and cultural resources, like urban growth and climate change. We see these challenges as an opportunity to coordinate conservation action and investment around a shared strategy. To learn more, read our statement of shared purpose.

SECAS brings together state and federal agencies, nonprofit organizations, private landowners and businesses, tribes, partnerships, and universities around a shared vision of the future. We’re working to design and achieve a connected network of lands and waters to benefit ecosystems, species, and people.

SECAS tracks regional metrics of ecosystem health, function, and connectivity to report annually on progress toward achieving the SECAS 10% goal.

SECAS develops the Southeast Conservation Blueprint, a living, spatial plan that identifies the most important areas for conservation and restoration across the region. It stitches together smaller subregional plans into one unifying map—a spatial action plan for achieving the SECAS vision and goal. Over 250 people from more than 100 organizations have used or are using the Blueprint in their work. Visit the SECAS in Action story map to explore in-depth examples of how the Blueprint is making a difference on the ground.

The Southeast United States is a cradle of biodiversity and home to some of the strongest conservation collaboration in the nation. 90% of the land is privately owned and private landowners play a significant role in defining the conservation future of the region. The Southeast also has a rich cultural heritage including the current and ancestral lands of indigenous tribes and other communities like the Gullah Geechee people. 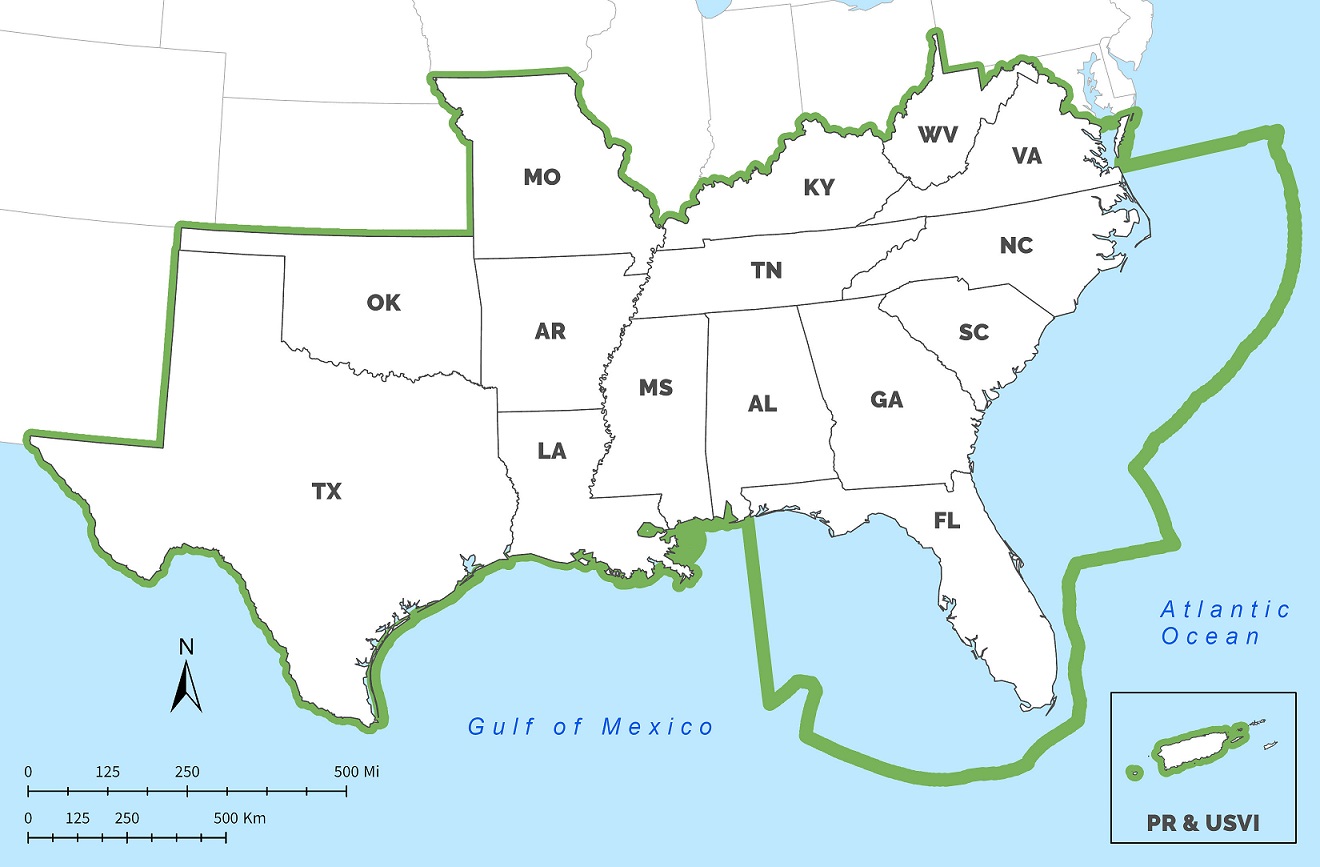 The history of SECAS

2011
SECAS was initiated by the Southeastern Association of Fish and Wildlife Agencies (SEAFWA) back in Fall 2011. SEAFWA recognized the need to rally conservation partners around a common vision for sustaining natural resources in the Southeast through 2060. Ed Carter, the Executive Director of Tennessee Wildlife Resources Agency, and Cindy Dohner, Southeast Regional Director of the U.S. Fish and Wildlife Service, were strong early champions for SECAS. In May 2012, Mr. Carter invited the Southeast Natural Resource Leaders Group (SENRLG) to help lead SECAS. SENRLG agreed, establishing an early governance structure made up of SEAFWA Directors and SENRLG Principals. Together, these SECAS leaders represented the state and federal agencies working on natural resources issues in the Southeast region. Each SEAFWA Director and SENRLG Principal also chose a Point of Contact from their organization to participate in more detailed discussions and provide a complementary “bottom-up” governance framework.

2013
In Fall 2013, SECAS leadership set a goal of developing a first generation Southeast Blueprint for landscape-scale conservation by Fall 2016. Many different conservation planning efforts were already underway, but most eco-regional plans only covered parts of states, while state-specific plans stopped at the state line. The results of all this parallel planning did not yet add up to an integrated regional strategy.

2015
To help advance progress on the Blueprint and other landscape-scale conservation efforts, the Southeast Climate Adaptation Science Center funded the Vital Futures project. Vital Futures directly supported SECAS by assessing the implications of climate change and other drivers of landscape change for existing conservation goals and management objectives.

At the Fall 2015 SEAFWA annual meeting, the first ever SECAS symposium provided a status update on progress toward developing the Blueprint.

2016
A year later, Version 1.0 of the Southeast Blueprint was first introduced at a SECAS summit at the Fall 2016 SEAFWA annual meeting. The summit inspired so much enthusiasm that the meeting space was standing room only, with people lined up in the doorway trying to catch a glimpse! Development of this first Blueprint relied heavily on Landscape Conservation Cooperatives (LCCs) across the Southeast and Caribbean and the diverse public and private organizations participating. The involvement in LCCs of regional partnerships like the Southeast Aquatic Resources Partnership (SARP) was particularly important in integrating products and planning across LCC boundaries. This plan provided the first ever integration of spatial plans developed through the South Atlantic, Appalachian, Gulf Coastal Plains and Ozarks, Gulf Coast Prairie, North Atlantic, and Caribbean LCCs. Southeast Blueprint 1.0 was finalized and released in December 2016.

2017
At the Fall 2017 SEAFWA annual meeting, Version 2.0 of the Southeast Blueprint was released. This kicked off the annual process of updating SECAS products for the SEAFWA meeting every fall. Southeast Blueprint 2.0 incorporated the improved subregional Blueprints from several LCCs and established priority connections with western states through the Crucial Habitat Assessment Tool. Significant improvements over the first version included improved consistency across LCC boundaries, improved consistency in climate change response, and improved integration beyond the Southeast. The SEAFWA Directors also charged SECAS with establishing an overarching goal for the SECAS initiative. SECAS leadership and the Points of Contact had all recognized the need to identify a key objective to define what SECAS is working toward, and develop supporting near-term metrics to measure progress.

2018
A year later, at the Fall 2018 SEAFWA annual meeting, both the SECAS goal and Version 3.0 of the Southeast Blueprint were unveiled. The goal was developed to be both ambitious and achievable—to galvanize meaningful landscape-scale change for natural and cultural resources, while also recognizing the need to be realistic in the face of significant threats from urban growth, climate change, and more. The long-term SECAS goal called for a 10% or greater improvement in the health, function, and connectivity of Southeastern ecosystems by 2060. The near-term metrics called for a 1% improvement in the health, function, and connectivity of Southeastern ecosystems, supported by a 1% increase in conservation actions within the Blueprint, every 4 years. Version 3.0 of the Southeast Blueprint was released in February 2019 . It included full coverage of Texas, integrated threat layers covering the full Southeast, and the addition of a hubs and corridors layer covering part of the region.

As an added challenge, the development of Blueprint 3.0 and the goal occurred during a time of transition for the LCC Network where the structure and function of some LCCs was changing. Despite these changes, the capacity and commitment to continue to support Blueprint users and improve the Southeast Blueprint remained strong.

2019
In 2019, SECAS supported an effort to identify a “Regional Species of Greatest Conservation Need” list from the large number of species collectively identified as priorities in the 15 Southeastern State Wildlife Action Plans. These regional priority species are intended to provide greater clarity and focus for regional conservation and multi-state collaborations.

That fall, the draft of Southeast Blueprint Version 4.0 was released at the SEAFWA annual meeting. Improvements over the previous version include: corrected overprioritization in Texas, Oklahoma, and the mountains of West Virginia and Virginia; improved priorities in the Lower Mississippi Valley, Louisiana marshes, and the Southern Appalachians; updated inputs from Florida and the Middle South subregion; expanded marine coverage to include state and federal waters around Florida; and expanded hubs and corridors that now cover all of Florida.

At the same time, SECAS unveiled the first ever report on progress toward achieving the 10% goal, Recent trends in Southeastern ecosystems.

2020
In 2020, SECAS embarked on a holistic partnership assessment called the SECAS Futures Project. It found that SECAS provides value in two key ways: as a forum for regional collaboration and as a hub for decision support and science delivery.

That fall, Southeast Blueprint Version 2020 was released at the SEAFWA annual meeting. Improvements over the previous versions include: finer resolution and a more connected network of priorities in the inland South Atlantic subregion; updated data and a more consistent approach to cross-state prioritization in the Middle Southeast subregion; and better integration in areas of overlap between the South Atlantic Blueprint, Florida Blueprint, and Nature’s Network design.

The second annual report on progress toward achieving the 10% goal was also released.

2021
In Spring 2021, the SEAFWA Directors established the SECAS Executive Steering Committee as an official committee of SEAFWA to provide oversight and strategic direction to the SECAS partnership, which was a priority recommendation from the SECAS Futures Project. The Steering Committee is made up of 5 State Directors and 1 Federal agency Regional Director. The regional associations in the Midwest (MAFWA) and the Northeast (NEAFWA) adopted a similar governance approach to advance landscape scale conservation initiatives in their regions. SECAS also implemented several other near-term recommendations from the SECAS Futures project, including creating a statement of shared purpose, making the SECAS Coordinator role a permanent full-time position, conducting succession planning for key staff and Steering Committee leadership, and initiating a Social Network Analysis of regional conservation partnerships to help guide deeper partner engagement.

In the fall, Southeast Blueprint Version 2021 was released following the SEAFWA annual meeting. Improvements over the previous versions include: updated and improved indicators, better incorporation of equity, deep-sea coral, fire, and important grasslands, and multiple connectivity improvements in the South Atlantic subregion, as well as correcting a scoring issue in the Middle Southeast subregion.

The third annual report on progress toward achieving the 10% goal was also released.

The need for SECAS

These changes affect not only our natural world, but also our quality of life and economic well-being. We rely on healthy ecosystems and the benefits they provide society, including clean and plentiful drinking water, outdoor recreation opportunities, protection of life and property, and other resources critical to industry. Wildlife- and fish-dependent recreation alone generates an estimated $20 billion in economic activity annually in the Southeast.

These challenges are too big for any one organization to overcome alone, but they offer a clear opportunity to rally around a shared plan. Through SECAS, conservation partners from every sector are making a collective impact to sustain our natural and cultural resources into a changing future.