In their Best Practices for State Wildlife Action Plans, the Association of Fish and Wildlife Agencies recommends spatially depicting “Conservation Opportunity Areas” that offer the best opportunities for conserving Species of Greatest Conservation Need. Not all states have followed this recommendation, but that is changing for Arkansas! The Arkansas Game and Fish Commission intends to use the Conservation Opportunity Areas, or COAs, to guide allocation of State Wildlife Grant funds.

In this ongoing project, the Commission, led by Wildlife Action Plan Coordinator Allison Fowler, has convened a team of stakeholders charged with developing COAs. Partners include the U.S. Fish and Wildlife Service, the Arkansas Natural Heritage Commission, The Nature Conservancy and Pheasants Forever. Dr. Toby Gray at Mississippi State University is providing technical support through a cooperative agreement funded by the Service. As the SECAS User Support contact for Arkansas, I am helping to facilitate the process.

The role of the Southeast Blueprint

The COA team reviewed the Southeast Blueprint, as well as the processes used by neighboring states that had developed COAs (MO, LA, MS, TN, KY and AL), before deciding what criteria and process they would use to delineate COAs for Arkansas. In the end, the team landed on three important elements: Habitat Condition, Species Distribution, and Conservation Opportunity. The Southeast Blueprint was used as a foundational dataset in the Habitat Condition and Conservation Opportunity elements. The COA team filtered the Blueprint to focus on the elements that best fit their approach. For example, while the Southeast Blueprint contains some information on future threats, the team did not consider threat information important for defining COAs. Rather, they considered it important for deciding what, how, and when to take action within the COAs. As a result, they excluded the threat components of the Blueprint. The team also included additional site-specific data and local knowledge to complement the regional Blueprint priorities.

For Habitat Condition, the team used the modified Condition Index map produced for the Southeast Blueprint 4.0 update scheduled for release this fall. This map improves on the existing condition information currently captured in Version 3.0 of the Southeast Blueprint because it parses out mixed and managed forest types from Open Pine and simplifies the ranking system. This map proved advantageous for the team because the habitat systems used in the AR Wildlife Action Plan (based on the Natural Vegetation Classification System) are directly cross-walked to a smaller set of broadly defined habitat systems (n=15) that were easier to work with. 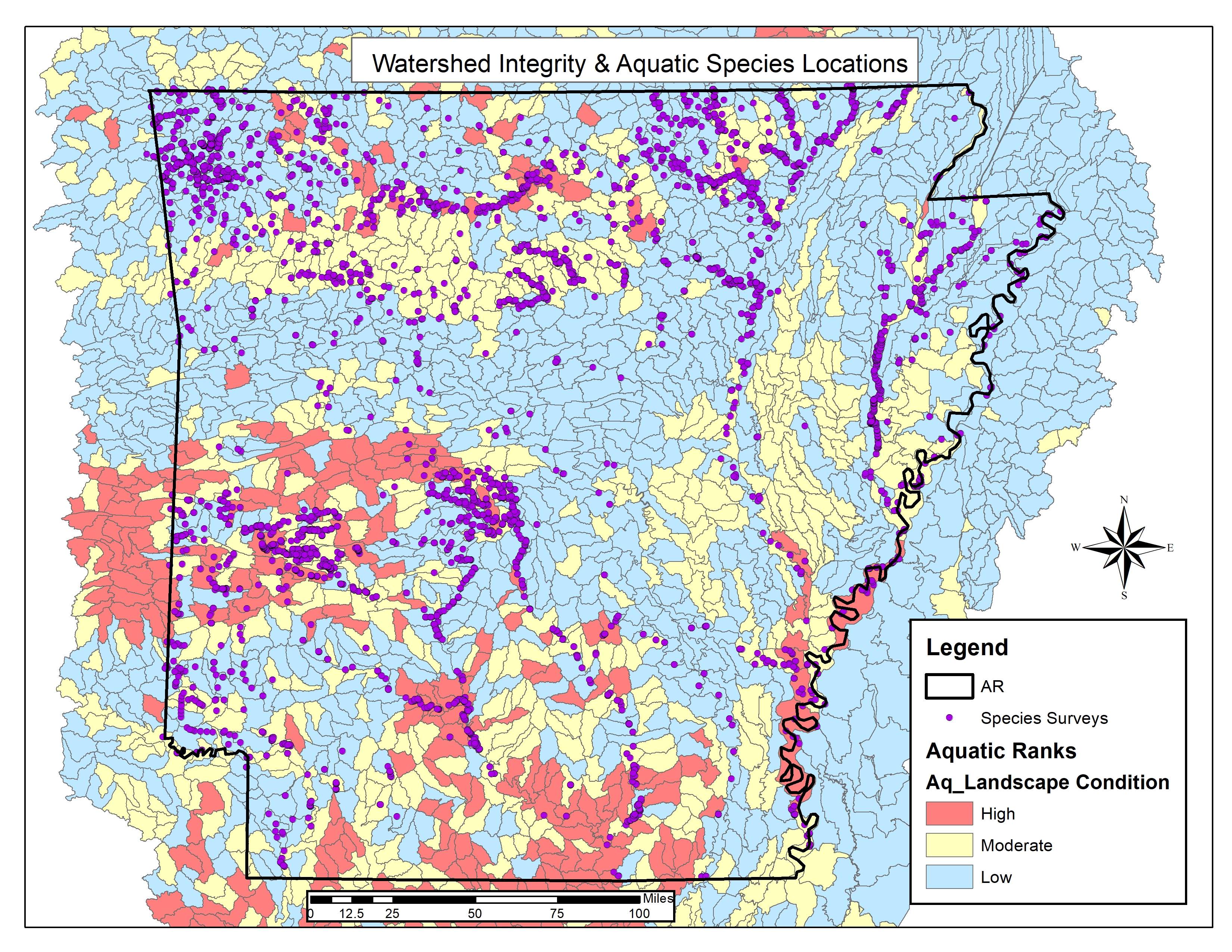 Point locations were gathered from a variety of sources for state priority fish & wildlife species and globally important plants.

For Species Distribution, the team wanted to use location data for the species included in the AR Wildlife Action Plan rather than distribution models for a small set of representative species. Unfortunately, not all species listed in the Action Plan are well tracked, and the Action Plan doesn’t include plants that were important to several of the partners. Thus, we mapped locations of fish and wildlife species with State Ranks of 1 or 2 and plants with Global Ranks of 1 or 2 for a total of 310 species. Location information was pulled primarily from the Natural Heritage database and other Commission databases. These were supplemented with outside sources where necessary (e.g., eBird). Locations were grouped into four time periods (2010s, 2000s, 1990, and all older) to weight them by the age of the data (e.g., museum records have less impact than recent records).

For Conservation Opportunity, the team used priority areas identified by various conservation organizations to represent opportunities to leverage existing and new resources that could enhance the Commission’s mission. The Southeast Blueprint provided an initial set of the partner priority areas. We further refined those by focusing on the subset where the team knew resources were already being directed, and by incorporating additional areas identified by other newly available datasets (e.g., Priority Amphibian and Reptile Conservation Areas”).

Putting it all together

The team decided to combine these three elements by simplifying each index (habitat, species, and opportunity) into three classes (high, medium, and low). This yielded 27 unique combinations, which were mapped separately for terrestrial and aquatic systems. The terrestrial systems used 1-km hexagons, while aquatic systems used 12-digit Hydrologic Units. Then, the combinations were ranked based on their importance to the team. For example, landscapes where all three elements ranked high were obviously important, but so were ones that ranked high for species and partners but low for habitat. Through this iterative process of mapping combinations and thinking about which combinations were more important than others, the team identified the need to elevate the priority of landscapes that contained narrow-range endemic species or rare natural communities. Known examples of these unique features were automatically ranked high for species or habitat, respectively.

Once the landscape rank maps were produced for terrestrial and aquatic systems, the team turned to delineating COAs. Here, the team considered additional information, including their risk tolerance (e.g., is it worth investing in heavily converted landscapes) and their expert judgement on how the probability of success differs among similarly ranked landscapes (due to factors like community support, likelihood that actions could overcome the problem, etc.).

The next step for the project is to share the draft COAs with a key stakeholder group–the Taxa Team Leads who helped develop the 2005 and 2015 versions of the State Wildlife Action Plan. The Taxa Teams are responsible for setting priorities for State Wildlife Grant funds, so buy-in from the Team Leads will be critical for geographically targeting those funds. In the next workshop on September 6th, the Team Leads will help finalize the set of COAs and their individual boundary lines. After that workshop, the COAs will be considered final for now. Developing and implementing a plan to allocate State Wildlife Grant funds to these COAs may highlight gaps or adjustments that are needed in the spatial data. The Commission has several years to test-drive these COAs and make adjustments before the next required update to State Wildlife Action Plans.